The important part of the quickplay rules to be aware of is in Guidelines III.4 of the FIDE Laws of Chess. It says:

If the player having the move has less than two minutes left on his clock, he may request that an increment extra five seconds be introduced for both players. This constitutes the offer of a draw. If the offer refused, and the arbiter agrees to the request, the clocks shall then be set with the extra time; the opponent shall be awarded two extra minutes and the game shall continue.

What this means is that once your time goes under 2 minutes if you are worried about losing on time you can ask for this and the 5 second increment can give you the chance to draw the game rather than lose on time. When you make the claim your opponent can take a draw if you have a won game at that stage.

He defeated Chris Sayers this summer in a close game .

The draw for this years competition as already brought some interesting games . 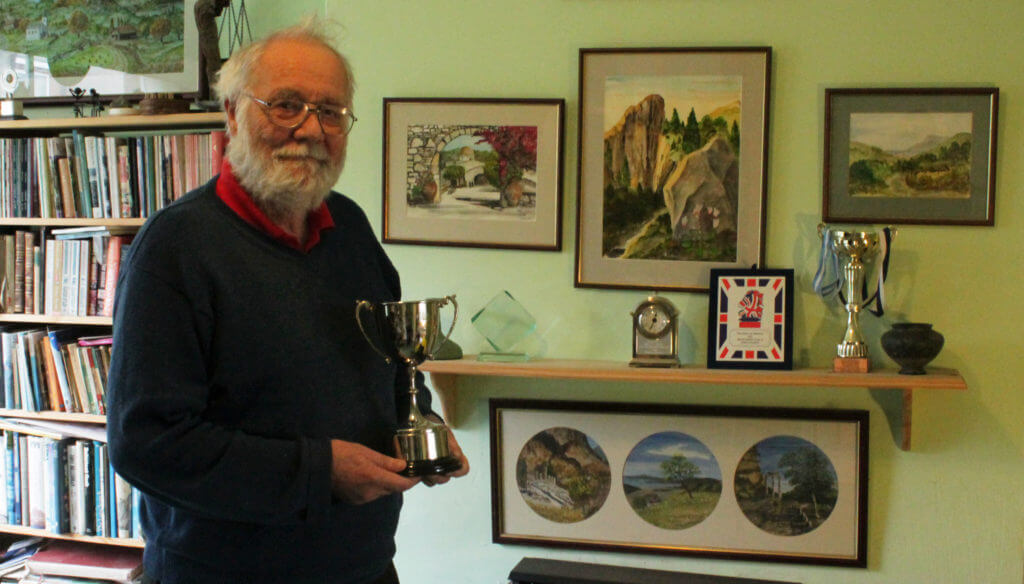 The following is a report submitted by the indefatigable Paul Bielby . A stalwart of the Chess Scene in the North of England and regular player for South Shields for a number of years now.  He can been here holding the Club Championship Trophy he won in 2015. You can also see some examples of his other passion , his paintings on the wall.

Until I retired from teaching 5 years ago I had been concentrating so hard on Junior Chess I had never thought very much about Senior Chess. Sure I knew that some tournaments offered a small prize for the best veteran, but that was all.Retiring allowed me to play more chess for myself. I won the Senior (over-60) competition at the Palaeochora Tournament in Greece, came back home and won the first NCCU Senior Championship for the newly instituted John Littlewood Cup for over-60s. I was hooked on Senior Chess. FIDE stepped in and altered their definition of Senior players so that their Senior Competitions were played in two age-groups, over-50 and over-65.The ECF followed FIDE into running their Senior Championship in two separate sections. I played in the Over-65s and shared top place at the British Championships at Warwick in 2015. Senior Chess, which has been big in Germany for some years, is starting to spread. My favourite Malta tournament has now introduced a Senior Section, sticking to the German pattern of Over-60.

What about Senior Chess in the North of England? The NCCU still runs the John Littlewood Cup competition subsumed within its Individual Championship. In addition it runs a Seniors competition for Club teams. I persuaded a number of my South Shields colleagues to join me in entering the competition this year.

A word about the NCCU Senior Club competition. It is for teams of four from one club. Their average age must be over 55 and no individual can be younger than 35. It is run as a knock-out competition. In the event of a drawn match the first tie-break is board count. To justify this the team with white on board 1 has black on boards 2 and 3 and white again on board four. If board count is equal the team with the higher average age wins. This year’s competition attracted 7 entries, South Shields were given a bye in the first round – straight through to the semi-final. There we met Darlington who had beaten Beverley in R1, and beat them 3-1. In the final we were due to meet Heywood from the Manchester area.
Leeds City Centre Chess Club arranged for us to use their club room for the match and on 22nd July the teams lined up for the match.

My game against Paul Timson was the first to finish.  He had the better of the opening and pressed hard, but swapping off pieces enabled me to hold things and a draw was agreed with a rook and seven pawns each left on the board.  At this stage it looked quite possible that all four games might be drawn, allowing us to win on average age!

Joe, who has been a tower of strength for South Shields since his return to chess, was the next to finish with a showy checkmate at the end.

Absolutely nothing in it so far

The simple 23. Bd3 is much to be preferred 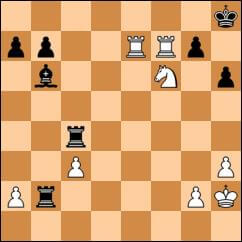 Black resigns – there is no defence.

This put us one up but, being on top board also meant board count would give us the match with only one draw from our final two games needed.  It was not going to be easy though.  Eddie  , the junior in the side aged 54 ,had been a pawn ahead in his game, but got himself into serious time trouble and succumbed.

All square again and all depended on Brian.  Could he get a draw?

White has a slight advantage here and knows he needs to win.  He aims to increase the pressure on the Q side 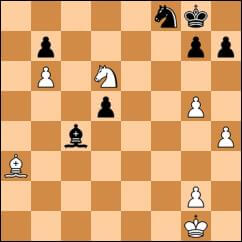 Much better than 32. … Kxf8 when White wins the b-pawn unhindered.

A blunder after which Black is clearly winning

After which point – with both players down to about 2 minutes each – nobody wrote down any moves.  The game lasted for several more moves, White blundered away his bishop and resigned just before his clock fell.

So we won the match by 2½-1½.  Desperately close; desperately exciting,  Age and experience won out in the end.  We really enjoyed our experience of Senior chess and very much hope that other  clubs in the North-East will join in next year .

Our thanks also go to Dave Patterson who was part of the team that beat Darlington in the previous Round . This was as always a club effort by South Shields. 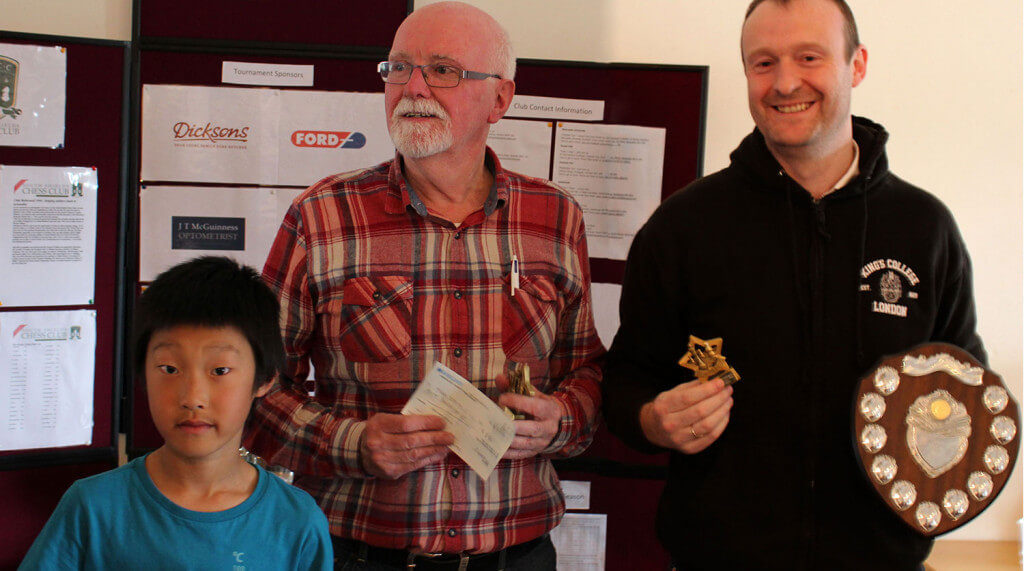 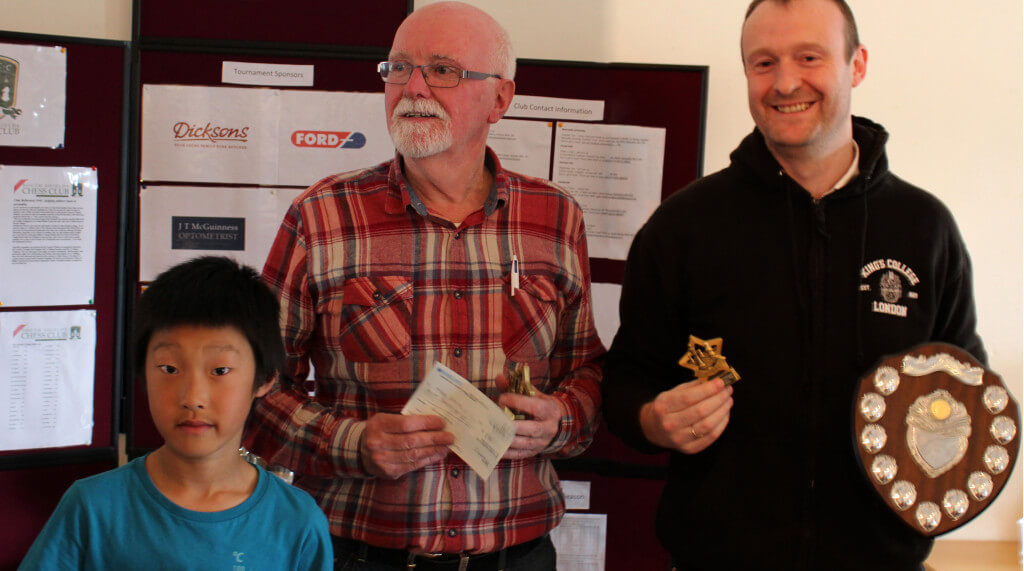 Chess players from all over the North East came together at the Customs House, South Shields to compete for the honour of becoming the Northumberland and Durham Rapid Play Chess Champion. South Shields Chess Club this year are celebrating its 150th Anniversary, so our members organised a special Rapid Play Chess Tournament, incorporating Northumberland and Durham Chess Association Rapid play Championships.

75 players, from as far a field as Edinburgh, Carlisle and Manchester were attracted to the event. With many more sending in apologies due to holidays and conflicts with other tournaments, we may have had to limit the numbers but fortunately it all worked out in the end. It was the first time this particular cultural venue had held an event of type. There were other events been held at the Venue, a craft fair on the riverside and a burger stand giving visitors plenty of options at lunch time. The competition was graded and was run on single competition basis which enabled 9 rounds to be fitted in during the day, so there was plenty of chess played. Each match was played on a 10 minute plus 5 second increment.

The Eventual overall champion was FM Charlie Storey. The Major Champion was Mike Smith and the Minor Champion was 8 year old Yichen Han. The general consensus was that most people enjoyed the congress and there seems to be a hunger for more of these one day congresses. South Shields Chess Club would like to thank Lara Barnes and Alex McFarlane  for all their efforts and for all the entrants to helping to make the event a very memorable day. 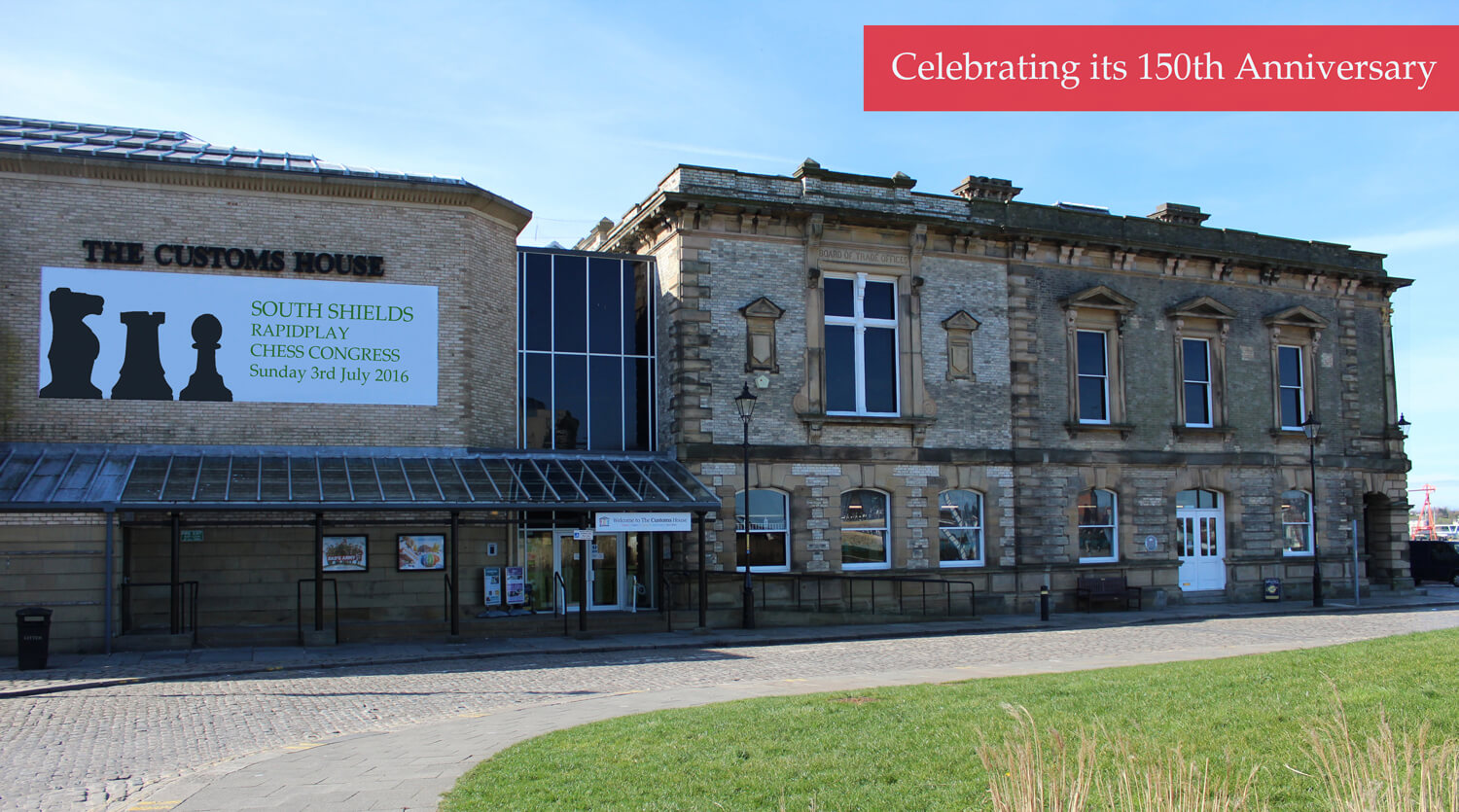 As part of our Celebration Events to commemorate our 150th Anniversary , we have decided to hold a One Day Rapid Play Congress on the 3rd of July 2016 , at one of the most Iconic Venues in South Tyneside, THE CUSTOMS HOUSE . Mill Dam.  For more information and the entry form for this event download the South Shields Rapid play Congress PDF. You can now also enter online .

The make the event even more memorable this year the event will also incorporate the Northumberland Association Rapid Play Championship .

This is a new competition with innovative features. There will only be one section open to all . Digital clocks will be used with time added on after each move ,most games will finish inside ½ hour. The time per game is  about the same as a  club friendly ,10 minutes + 5 seconds per move . It will be held at  Forest Hall Ex-Servicemen’s Club on Sunday 22nd of November 2015. For more details  click – Northumberland Fast Rapidplay .

The Ron Evers Competition is a Handicapped RapidPlay competition that this year will be played for on a  6 game Swiss Basis .

It will be played for on 3 nights , 2 rounds will be played on each of the nights . Teams play each other twice , once black and once white . Venues added as soon as confirmed

It is open to all the members of our  Club . If you definitely know you want to play then let Eddie /Stan  know . We need mulitiples of 4 team players .

Thursday the 27th August has been set for the Annual General Meeting of the club members .

Areas under discussion include ideas for the 150th Anniversary Celebrations next year ,election of committee members ,  pencilling in of team names for the coming season . We expect to play 4 teams , 3 in the Northumberland and 1 in the Durham League . There will also be the presentation of Trophies to Competition Winners .

This years British Chess Championships were held at Warwick University . A few of our members took the time to play in some of the events and it with great pleasure we can report that Paul Bielby became joint OVER 65 champion with a score of 4.5 out of 6 . Next years Championship will be held on the Riviera of the South ,,,, Bournemouth .

Mike Savin is organizing a 10 minute Rapid Play , This Thursday the 13th August . Please try to arrive by 7.15 pm …. If you know you are definitely coming then send him an email .

I have also added a new feature to the website , if you register your email address  then you will get automatic updates telling you when a new post has been added to the site .