The Club Championship was contested through the last season by 20 of our members  in a World Cup Format .

Paul Bielby finally won out after a couple of close calls on the way  . The finalists kindly gave us permission to review their game and also gave us some insights into their thoughts at the time .

1. e4 e5 2. Nf3 Nc6 3. Nc3
(PB)An oddly defensive move for an attacking player like Dave.  The N on c3 blocks the pawn move c3 which assists White control ihe centre.
(DP) Agreed,  I was a little intimidated by Paul, knowing how strong and attacking he is. I would have preferred the Kings Gambit but he knows it inside out. I chose a waiting/watching game early on.
3. … Nf6 4. Bc4 Be7 5. d3 O-O 6. h3 d6 7. Bd2 Na5
(PB)Nothing very much has happened so far, both sides have developed most of their pieces.  Black is safely castled and White is preparing to do so.  With this move Black wants to break the equilibrium by exchanging N for B.  White allows him to gain space on the Q-side, but there is no escape for the B.
(DP) d3 was careless allowing Bishop to be trapped and exchanged
8. Bb5 c6 9. Ba4 b5 10. Bb3 Nxb3 11. axb3 Bb7
(PB)Black has fully equalised and now threatens the advance d5 to take control in the centre.
(DP) at this stage my doubled pawns and poor Queens Knight left me in a weaker position than I would have hoped. I perhaps should have tried Ne2 instead of Be3 (releasing c pawn and allowing Ba5 to harass the black Queen.
12. Be3 a6 13. O-O Qc7
(PB)Again preparation for … d5 – but now White blunders
(DP) I’d prefer to see it as a black sacrifice from an attacking player😀 as Nxe4 wasn’t forced.  The aim was simply to try to exchange my knight for the stronger black bishop by moving on to Nf5, but it was a sloppy move. 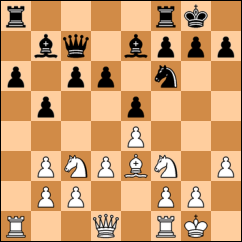 14. Nh4?? Nxe4 15. Nxe4
(PB) His best try, giving him some attacking chances.  Otherwise he is simply a pawn down.
(DP) agreed, I felt a pawn down to Paul, plus doubled pawns would have left an uphill struggle.
15. … Bxh4 16. Qg4 Be7??
(DP) Qg4 seemed a natural attacking move at this stage with the intention of following up with a mate threat on g7.  (Ever the optimist. At least now I was attacking and felt more comfortable😀)
(PB)Black blunders in turn.  16. … Bd8 is much safer, so that 17. Bh6 is met by … f5.
(DP) If 16…Bd8. Then probably try Ng3 but not sure if it would lead to a strong attack.
17. Bh6 g6 18. Qe2??
(PB)White is frightened of the line 18. Bxf8 f5 19.Qe2 Rxf8 where Black has an extra pawn and a hugely active pawn centre to compensate for the loss of the exchange.  None the less it is his best chance.
(DP). Frightened is too strong a word😀 I was too optimistic in thinking that the attack was going to give me better winning chances. I much preferred that than meeting such a strong pawn structure with Paul at the helm.
18. … Re8 19. f4 f5 20. fxe5
(PB)White sacrifices a piece for a strong passed pawn and control of the open f-file.  Unfortunately it’s not quite good enough.
(DP). At this stage 19…f5 was coming no matter what and was a strong defensive move, so I decided that the sacrifice (fxe5) was the only way I could keep some winning chances. 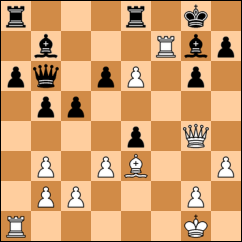 (PB)The ending is easy for Black, a clear piece up.
(DP). Agreed, that’s why I resigned.

The Ron Evers Final was played between Durham and South Shields A on Thursday 11th May . On paper Durham were the much stronger team and so the Handicap offered South Shields a 1.5 point advantage . Following two hard fought rounds Durhams strength showed , they overcame the disadvantage to win by 0.5 point overall . Congratulatulations to Durham and well played Paul Bielby , Kevin Rowden , Ben Wood ,Stan Johnson and Colin Campbell for getting so close to winning the trophy this year. There ‘s always next year .

Full League tables and results of the divisions clubs can be found on the respective Durham and Northumberland Websites.

But keep checking on our website for latest news .

Don’t forget to join the ECF . You must be a member of the ECF to play for the teams or in the club competitions . we would prefer you did this yourself or you can pay Stan Johnson and he will do it for you . You can follow the link to the ECF website from our links page .

Please advise your team captain of any issues with any dates

This years team, captained by Kevin Rowden, finished a close runner up in Division Three of the Northumberland Chess Association league. You can view the full results table on our Competition section of the site.

We hope to get two teams together for the next season and we welcome you to join us if you are interested in having a laugh or playing a bit more competitively!

We meet from 7pm till 10pm on Thursdays at The New Ship Inn, full details can be found on our Venue section. We hope to see you there!

Season 2014/15 starts in Sept  and we are hoping to have more teams entered in both Northumberland and Durham Leagues .